home Start-ups, Technology & Innovation If we want a change, we should be the change: Creating a plastic free world

Have one ever thought that after using the spoon and fork during a meal, one can snack on the same utensils too?

Well, this actually sounds a bit implausible, but if you consider this as among your weird wish list, count it a wish granted.

When majority of the countries of the world are still using plastic or steel cutlery and chopsticks for big meal events, in Hyderabad, India, they have already started using consumable cutlery in various sizes and flavours.

Yes, one can eat with it, then eventually eat it.

The inspiration from the table

It is highly unlikely that inventions and innovations exist from a vacuum. In the case of the edible cutlery, the inspiration must have come from the table. Some discoveries are aha-moments like those of the law of gravitation.

In the case of the edible cutlery, it was not an apple that struck the person behind it, but more likely a spoon?

It must have been a sudden flash of insights that struck him when he saw a passenger using Gujarati khakra as spoon to eat dessert during one of his flights from Ahmedabad to Hyderabad in India.

“Whenever I travelled, I used to feel terribly guilty about using plastic cutlery because it created so much plastic waste. Why couldn’t we create an alternative?” thus pondered Narayana Peesapati, the man behind the edible cutlery and now the CEO of Bakeys.

In a country which makes use of around 120 billion pieces of cutlery, it is easy to get fed up with these tons of plastics that ultimately find their way to mountainous landfills.

After having seriously venturing into this question, he finally found his Archimedic solution: utensils that can be eaten after a gastronomic tour from the table.

Use, taste and eat it

“The cutlery is tasty, fun, nutritious, and environmentally friendly” says Peesapaty who sold their family dwelling together with some savings to put up a start up (Bakeys) and bring his ideas to the market. 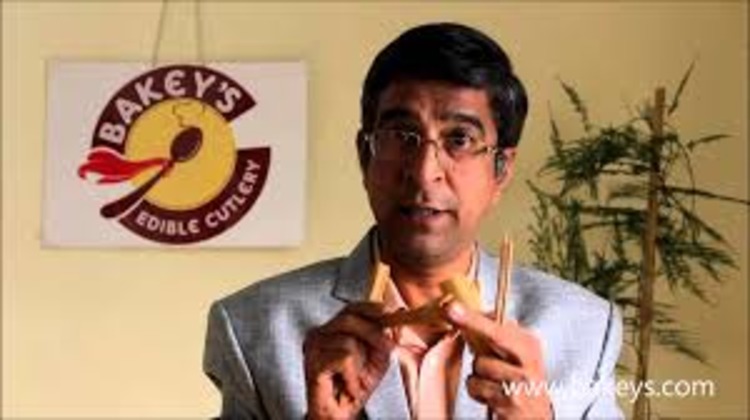 Natural and bio-degradable, these eco-friendly kitchen utensils have a shelf life of three years and organically decomposes in four-five days should one decide not to eat them.

And the taste? Frown not as one can choose in three different flavors that suits one’s palatal cravings: plain, sweet, or spicy. One chooses as one desires.

If you are wondering what they are made up of, it is the same question everybody else have in mind.

Bakeys have this to say to satisfy general inquisitiveness: “…these (referring to the cutlery) are made of flours. The flours are kneaded with plain water – no additional chemicals and not even preservatives. They are 100% natural and made under strict hygienic conditions. We have tried making them with various flours and closed on Jowar (sorghum).”

Why sorghum and not any other? Peesapaty said that Bakeys uses sorghum mainly because it needs 60 times less water to grow.

Sorghum is a millet plant that Bakeys claims requires less water to grow. “Rice is a water guzzler,” says Peesapaty, a claim supported by the International Fund for Agricultural Development which estimates that around 1000- 3000 liters of water produces a single grain of rice.

Why cities may opt for edible cutlery

In a world where a growing concern on plastic becomes a global dilemma, it has become increasingly vital particularly on urban areas to find ways on how to solve or at least minimize the use of plastic bearing in mind its negative repercussions to the environment.

It is estimated that global plastic production has grown from 15 million tons in 1964 to 311 million tons in 2014. The World Economic Forum projected that this figure will triple by 2050.

Within the United States alone, the figure is a whopping 40 BILLION plastic utensils being used annually.

Put it in a worldwide scale and you get 16 times this magnitude.

It’s a huge urban burden because more often than not, these utensils are only used but only once and then disposed.

Smart cities cannot afford to put these utensils in bags and dispose them away in landfills for as when they do, they would pile up as mountains of thrash that would remain in the soil for the next thousand years.

Cities that are forward-looking look for more sustainable approaches to deal with the problem, considering that in 2050, cities will be home for around 70% of all humans.

With grim issues like environmental sustainability, climate change, and the global water crisis, it is definitely not at all a bad idea to adapt a sustainable table behavior to respond to the changing demands of the time.

Before you merely use them, now you can eat them.

Find out more in this full video: