In recent years, it is evident that it is not enough to gauge a society in economic terms. A good society is one which takes into account the general well-being of its citizens. An important component of well-being is a feeling of belonging, a sense of camaraderie between and among the members of the community. No wonder as a quantitative measure of well-being this sense of belonging in a community is ineluctably an integral component.

Torch, artistic director of Timisoara 2021 underscores the importance of a sense of community in a certain nation. A community forms the warp and woof of the foundation of a nation. It is where we live, work and study. It can be gainsaid that a community is an essential unit not only socially and economically; the concept of community equally finds itself in the cultural domain.

The need for a sense of community

With major issues confronting human society such as climate change, migration, constantly increasing xenophobia, reduced public participation to governance, to mention a few, it becomes increasingly imperative to develop a strong community. One way to make this possible is to develop a sustainable urban culture.

Timisoara 2021 lives up to this guiding maxim: “Shine your light/Light up your city”. Having been adjudged by an international jury as the European Capital of Culture, the city is in a privileged position to promote the diversity and richness of European culture and the feeling of belonging to the European Union.

It is in this context that cultural workers and members of the creative industries are needed more than ever before to bring people back to gather together as community in public spaces.

Alluding on the metaphor of a village which gathers itself in a circle in solidarity and camaraderie to celebrate community events, Torch gently but emphatically reasserts the notion that “the job of a cultural worker is to recreate that circle, that is, to bring back people in that circle in unison.”

“The engagement unit of any cultural organization,” according to Torch, is conceived to cater for this communication function. “It is not about marketing. It is about people to people communication. It is about going to school and meeting students in their natural community. It is about taking the hand of an old woman and helping her to come and witness a performance,” Torch added.

The community as microcosmos

To drive home his point on the importance of intercultural interactions, Torch evokes a well-meaning reply from Peter Brook, one of the best living theatrical directors not only in Europe but the world over, who when asked what moved him to organize the first intercultural and multicultural company in the continent, is said to have quipped: “because I want to create culture like yogurt, similar to bacteria in a microcosmos by assembling a small group of people…like bacteria that spread themselves throughout the society and transform the milky substance to the society into something rich, healthy and good….” 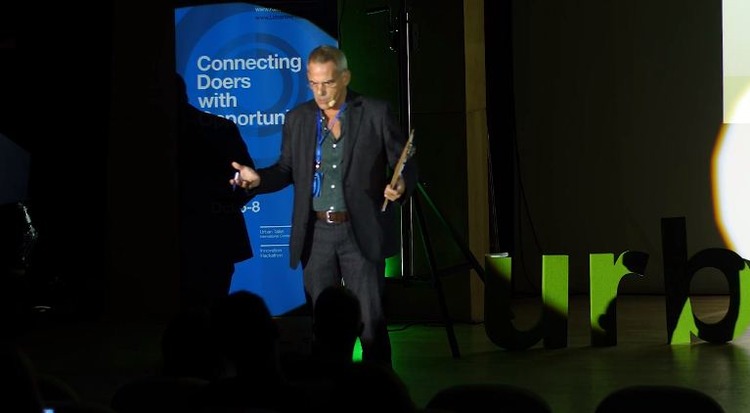 In the same vein, Torch stressed that “this idea of microcosmos is embedded in the idea of the community. Timisoara 2021 was inspired to start its journey not at the edges, not in dreams, but at the very sense through the capacity building program of the cultural sector to change, engage and be part of the transformation.”

“Our job in Timisoara 2021 is to bring conditions for urban reinvention, for citizens’ engagement because this is essentially a cultural question. It’s not about how much money we make or where we live or even what we do as jobs to produce for others. It’s about what we do together… Timisoara 2021 is not about the arts only but it is about radical and long-term sustainable cultural change. This is the legacy that we wanted to make in 2021, 2022, 2023 and beyond….,” Torch  further added.

In closing, Torch evoked a brief but insightful anecdote about Mahatma Gandhi, the enlightened leader who put an end to centuries of British colonialism in India.

Gandhi, on being asked, “What do you think of Western civilization?” was reported to have answered, “I think it would be a very good idea”.

Along this line, Torch concluded with this conjuncture: “…I find it inspiring. It is in fact a very good idea. Let’s make it happen and we can only do it in a small unit, the microcosmos of our community and then slightly larger composite units of our city….”

Watch the full video of Torch’s talk below:

Chris Torch serves as Artistic Director for Timisoara 2021 – European Capital of Culture (Romania) since January 2017. He founded and until recently was a Senior Associate, at Intercult, a production and resource unit focused on culture, ideas and the arts. During 2012-2013, he was designated expert to the EU Open Method of Coordination (OMC) group on Cultural Diversity, including 22 EU Member States. He serves currently on the Board of Culture Action Europe and earlier on the Boards of the European Museum Forum and IETM.