Imagine a city free of crime, government, poverty, money, and hardship. This is the vision that built Auroville, a township in India dubbed ‘The City of Dawn’.

Founded in 1968 by Mirra Alfassa (also known as The Mother), Auroville is meant to be a universal town where men and women of all countries are able to live in peace and progressive harmony, above all creeds, all politics and all nationalities.

The purpose of Auroville is to realize human unity. Alfassa was inspired by the vision of Sri Aurobindo, the city’s namesake, an Indian nationalist and revolutionary, and later a yoga guru. Intended for about 50 000 people, Auroville now hosts about 2 500 people permanently and is visited by 5 000 tourists annually.

Designed by architect Roger Anger, the city resembles a spiral. In the center of it stands the Matrimandir, a golden metallic sphere intended for meditation. Matrimandir is equipped by a solar power plant and surrounded by gardens.

Radiating from this center are four “zones” of the City Area: the “Residential Zone”, “Industrial Zone”, “Cultural (& Educational) Zone” and “International Zone”.

Around the City or the urban area, lies a Green Belt which is an environment research and resource area and includes farms and forestries, a botanical garden, seed bank, medicinal and herbal plants, water catchment bunds, and some communities. 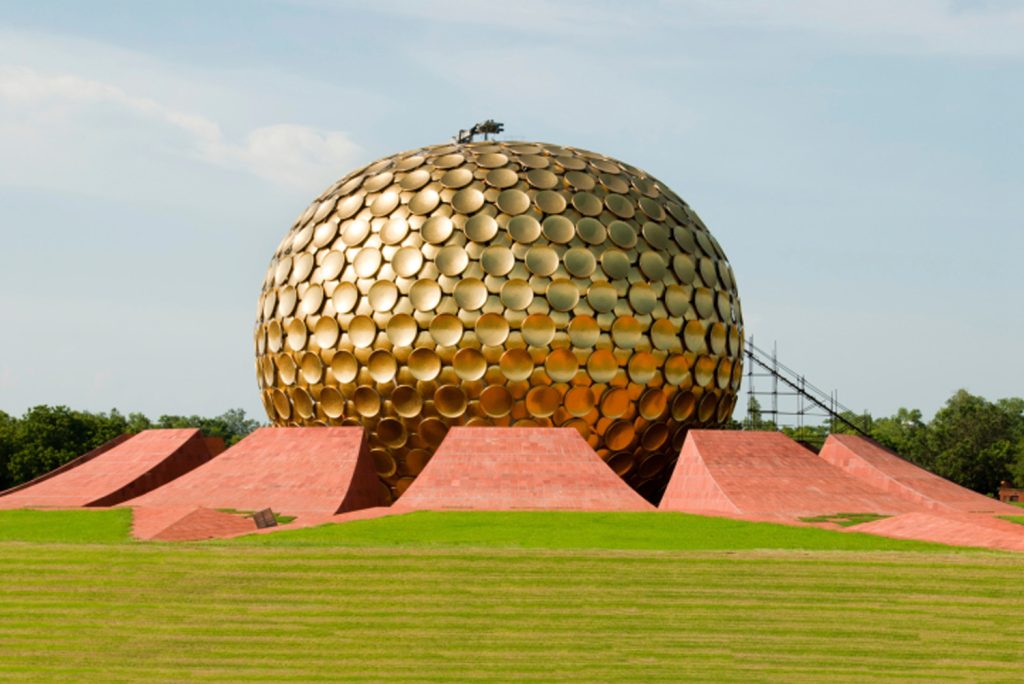 The Auroville City Charter is what keeps the community running almost half a century later:

The members of the community largely rely on their own work to sustain themselves. Energy is provided by the numerous solar panels that litter the city (in addition to those installed at Matrimandir).

In addition, ecological agriculture is, by necessity, an activity in which all Aurovilians engage. On the surface, it seems like the vision has been largely achieved, with green energy, communion with nature, and spirituality being the key words here.

However, as author Maddy Crowell notes in Slate, when you scratch the surface a different picture appears. Reports of crimes ranging from robberies to sexual assaults and murders have surfaced in the past years, with safety being a major concern in the community.

Without an established police force, the community has resorted to employing private security providers, but they are incapable of properly covering the terrain. With most of Auroville shrouded by greenery, the best they can do is patrol major intersections.

Another major issue worth noting, but that doesn’t concern Aurovilians, is that of money. Where do the funds go if there’s no official government?

Crowell points out that with the annual contributions from the Indian government, the fees paid by Aurovilians when they become citizens and a house is entrusted to them, as well as numerous private donations coming from tourists and a variety of others, there is a considerable amount of money that is pumped into Auroville.

However, the progress of the city remains slow-going in a lot of areas, with the only major investment in sight being that into solar energy.

Maybe looking at Auroville through this governmental lens defeats the purpose of the city. After all, utopia is for dreamers and so is Auroville. The city was founded by and for those more concerned with spirituality than the nuts and bolts of running a successful (by Western terms) city, with its adjoining government, infrastructure and policy concerns.