The automotive industry’s ‘green revolution’ hopes to make electric vehicles far more efficient. Every bit of force under the hood should be used to its maximum potential. That’s why there are concepts such as regenerative braking, which returns some of the energy used in braking back into the system. But Audi is looking at tapping into another roadway staple: potholes. They’ve created a system called eROT, an active suspension system that stores the energy generated when a driver hits potholes, bumps, and other forces that induce kinetic energy on a car.

The principle behind eROT is easy to explain: “Every pothole, every bump, every curve induces kinetic energy in the car. Today’s dampers absorb this energy, which is lost in the form of heat,” said Dr.-Eng. Stefan Knirsch, Board Member for Technical Development at AUDI AG. “With the new electromechanical damper system in the 48-volt electrical system, we put this energy to use. It also presents us and our customers with entirely new possibilities for adjusting the suspension.”

The eROT system responds quickly and with minimal inertia. As an actively controlled suspension, it adapts ideally to irregularities in the road surface and the driver’s driving style. A damper characteristic that is virtually freely definable via software increases the functional scope. It eliminates the mutual dependence of the rebound and compression strokes that limits conventional hydraulic dampers. 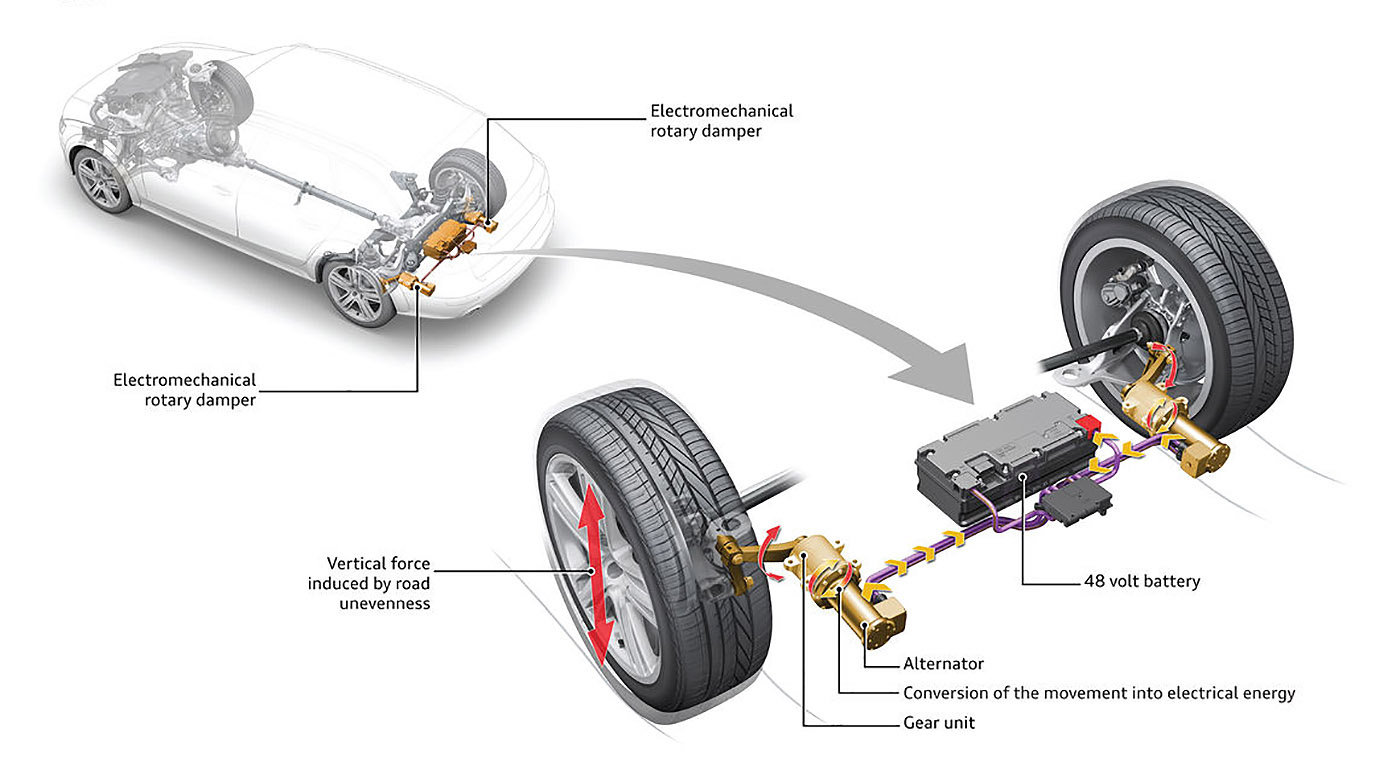 This is all accomplished by having a lever arm absorbing the motion of the wheel carrier, which is then transmitted to an electric motor via a series of gears. The electric motor then transforms this into electricity. On average, this system is able to pump out 100 to 150 watts. That varies depending on road conditions. For example, a newly paved highway will generate as little as 3 watts, and a rough country road as much as 613 watts. According to Audi, this would translate to CO² savings of up to three grams per kilometer (4.8 g/mi).

But this system doesn’t just store energy from potholes. eROT also makes your drive better. The system allows the dampers to adapt to the road conditions and the driver’s driving style. These new dampers also free up space in the lugage compartment.

Drive better, and enjoy the potholes along the way. Seems like a pretty good deal.