home Civil society, Community ideas/opinions, Urban Culture The best way to empower the citizens of the future is empowering ourselves

People engagement is such a trendy word. While it is a powerful tool to get people think and reflect on things of great significance, of things that matter to the city, the country and the international community, it is not a run-of-the-mill stuff that one can easily execute. Why is it so hard to engage people? Why is it tough to get them care about issues of importance? What is the best approach to involve people in the city? These and other interesting questions were addressed by Alex Glod, a senior trainer and co-founder of the first Storytelling Community in Bucharest.

The world is witnessing the astonishing accomplishments of modern institutions. Astounding progress in terms poverty alleviation, fast-paced economic growth, impressive advances in technology—these are some of the manifestations that the world lives in an amazing period of time.

The reluctance to engage

Despite the incredible development that the modern world has made in the past decades, an ordinary person in the street does not seem to see or describe them the way they are depicted in statistical or economic terms.

Why is it so hard to engage people, to get people care about issues that are important to all citizens? 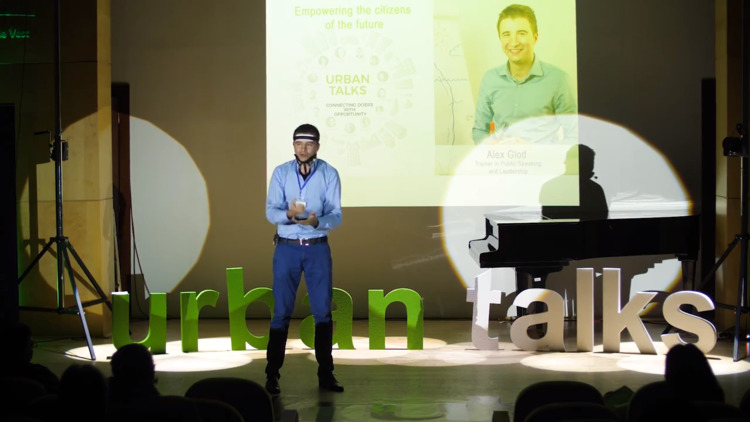 “It’s a five-letter word. Shame…it is the innate feeling of not being a good enough, of not feeling a part of the community, of being distant to the world…it is the best way teachers use to put students back in  their seats. Name-calling, bullying, violence, these are the best tactics to putting us in our place,” said Alex.

Glod relates that shame is such a complicated and hard emotion to experience because people do not merely suppress it in themselves, but they suppress it to anyone they see. As a result, they project more pain and continue the self-proclaiming cycle of shame after shame.

It is imperative to break the vicious cycle of shame because it affects people in many ways. An important step to do this is to deal with compulsive consumption. As an illustration, he cited people’s addictive compulsion consumption of the media, which makes people feel to be a part of something huge that does not in reality include them. People feel disconnected in the process.

Glod further relates that people should look into the caterpillar for inspiration on how to break about from the cycle of shame. There is a stage in the caterpillar’s life when it eats a lot, then stops consuming, subsequently turns into a chrysalis and finally transforms into a beautiful butterfly. Similarly, people need to let go of the negative emotion that shame produces, to find out where the fear of failure and the feeling of vulnerability emanates before anything meaningful meant to change the world can even take place.

In the same vein Glod urged the listeners to let go of the idea that showing emotion is a weakness. Doing this self-initiated therapy is the perfect start in process of transformation. Knowing the self-repeated patterns, self-understanding and self-empathy are crucial to this healing process.

Building self-empathy has the effect of building empathy for other people. Alex stressed that once people get to understand what it means to be disconnected, what it means to be pushed by force that they don’t agree with, to be hurt and to let go, things start to change. Once a person decides to take the lid off, extract the shame and negative emotion, wonderful thing happens emerge in this process—creativity, compassion , empathy, kindness and love.

Glod added that what all people need to solve most of the problems in the world is love. He meant love not in heavy way but love in a strong way—one invested with dedication courage, efforts, giving one’s best even without guarantees. By way of example, he cited the Teach for Romania, whose first goal on day 1 of the class is to make students feel worthy.

In the same manner that a caterpillar shells itself into a chrysalis, ultimately leaves its cocoon, spreads its wings and woes every spectator when it transformed into a beautiful butterfly, people can transform into a wonderful creature that they could be and serve as an inspiration to the world. Imagine what the world could be if every single person transforms itself into a beautiful butterfly and inspires other people of their great transformation. This will make the city an even wonderful place to be.

Having said that, Glod stressed that this is precisely the reason why the most important element of building the cities of the future are not infrastructures but its people. Driving home his point, Glod shares “the more we create empathy for ourselves and the people around us, knowing how to have proper conversation and engage with them, we can build amazing things.”

Well-meaning citizens can find avenues in one way or another to open the door for their stories. Once a person manages to come to grips of it, he can put it in service to other people.

Glod concluded his talk with a terse but a powerful message: “Once you let your wings out, once you share your story, it gives a sense of hope. The best way to empower the citizens of the future is empowering ourselves and being the best example we want to see in the world. It is important to not go in this alone. We all need a friend…Once we get all together it’s a matter of letting the dominoes fall and the effect will come.”

Learn more straight from Alex in this full-video:

Alex Glod is a Trainer and TEDx Speaker at TEDx University of Piraeus 2015 and TEDx Bacău 2015. He is the co-founder of the first Storytelling Community in Bucharest. He is a senior trainer and has trained over 1000 people in Public Speaking, Storytelling and Leadership in countries from both Europe and Asia.