Freeing busy city areas from cars for a few hours is a policy initiative that seeks to reduce high pollution levels as well as allow people to enjoy a few hours of cycling and walking through iconic streets. Civil society has played an important role bringing up this initiative to their local municipalities, to the extent that politicians are making important vows to reduce pollution.

Paris first went car-free in September 2015 when Anne Hidalgo, mayor of Paris, responded to the collective “Paris without Cars” claims. Witnesses agreed that the sky in Paris was more blue than ever and that laughter was the highlight of the streets. However, only one-third of the city was entirely car free, with the rest of the zones forcing drivers to not exceed 20 kph. By noon, taxis and buses were allowed to move freely around the city, including the car-free areas. 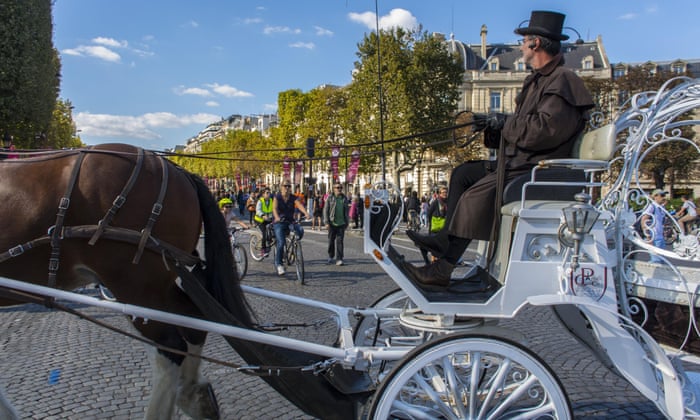 As a result of this first car-free day, Hidalgo has put reducing pollution at the top of her agenda, vowing to eradicate diesel use by 2020 and extend car free zones along the Seine. Also, since April 2016, every first Sunday of each month cars are banned from circulating around the Champs Elysées, one of the city’s busiest areas, to cut smog and to incentivise more walking and cycling activities.

New York City has also joined to this the movement, although not without some limitations. Last August 13th, Manhattan witnessed its financial district filled with pedestrians using roads like pavements and cyclists riding their bikes freely. Shared Streets, the event’s name, held a border around the financial district with checkpoints controlling car entrance and with drivers being told not to exceed 5 mph.

Nevertheless, cars often violated the 5 mph limit and would at times bump on civilians. Also, many civilians acted surprised when told about the event, perhaps a sign of a lack of engagement with the initiative among New Yorkers. For now, it is not known yet if Shared Streets will be repeated or extended next year as officials still must survey businesses and participants about the experience. On the other hand, Paris continues to make efforts to transform the city into a more eco-friendly European capital. Hidalgo has promised to pedestrianise nine new routes every Sunday and public holiday.