Leading the world’s trillion-dollar club economies, the US still has what it takes to be the world’s epicenter of the global economy.

Americans are known for their “adventurous spirit, which distinguishes the commercial character of America,” as Alexander Hamilton, one of the founding fathers of the American nation, described it.

Perhaps this would account for the present formidable size and almost invincible strength of the American economy.

To give you an idea how formidable American economy is, consider the following:

If US cities were countries…

The US remains the largest economy in the world by nominal GDP with US$19.42 trillion. This accounts for 25% of the world’s gross product.

If you are wondering where the GDP of the US are centered on, Mark Perry, economist of the American Enterprise Institute (AEI) has the answer: America’s largest cities.

This interesting fact is consistent with what McKinsey Global Institute (MGI) previously reported back in 2012 that the top 600 global urban centers (based on GDP) account for more than half of the world’s GDP.

MGI further predicted that in the next 15 years, the 259 largest US cities are projected to contribute to more than 10 percent of global GDP growth.

Not surprisingly, these cities are claimed to have GDPs larger than most countries in the world.

This like an exaggeration. But few people are aware that America’s 19 largest metro economies, if taken individually as nations, will all find spots in the world’s top 50 largest economies.

Here is another equally astonishing fact: all American cities taken together contribute more to global GDP than the rest of the world’s cities combined. 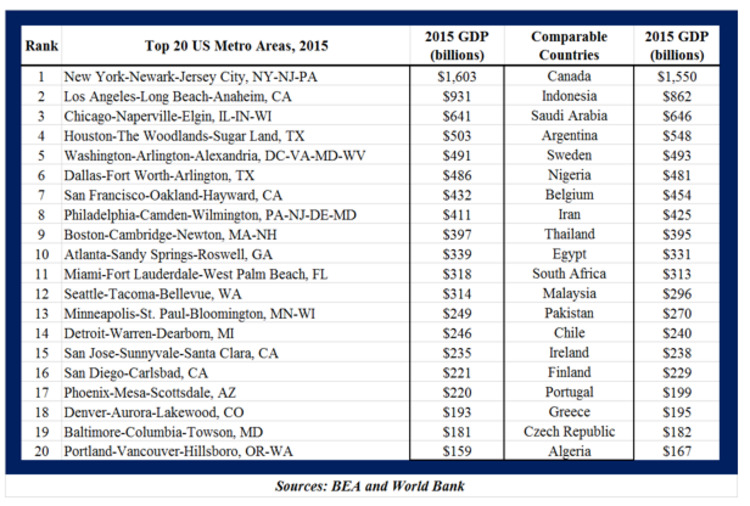 Perry of AEI explained further that if major US cities were to be treated individually as countries, here is what they would look like:

US states compared to countries

The US economy is equivalent to the economy of 51 countries.

Look at this map below from the World Economic Forum: 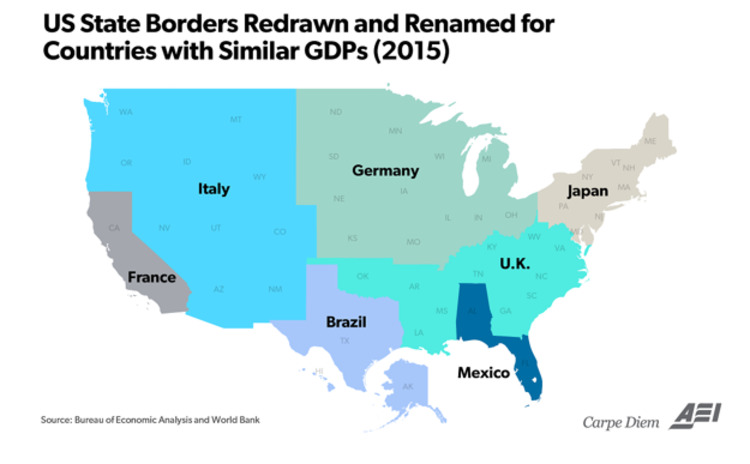 The following similar observations can be made relative to American state economies vis-à-vis economies of other nations:

To find out more, watch the video below from the World Economic Forum:

The US has been the world’s leading economy for more than 100 years, starting from the 1870s, after it took the title from Great Britain.

As economic power shifts to rapidly emerging regions of the world, the giant economic behemoth that is US may not be able to hold that position for long.