The Chinese economy is considered as a key driver of the world’s economy and its cities are major economic players that serve as engines of its tremendous growth in the past decades.

As one of the world’s foremost economic mitochondrion, the Chinese economy is powered by about 1.4 billion people in a very vast part of Asia.

A communist government operating in a market-oriented economy, a long standing but ever evolving and complex cultural and historical vignette and with its recently aggressive economic and diplomatic pursuit of interests with other countries, Chinese economic growth remains a beautiful puzzle for many.

Just to give you an idea how monstrous the Chinese economy is, consider the following facts:

Chinese cities with GDP comparable to a country’s economy

Dubbed as the sites of “World’s Factory,” Chinese cities are among the largest economic producers in the world today. They are world’s leading manufacturing hubs.

To put into perspectives the size of the Chinese economies, each of the 35 Chinese cities below have a GDP that is equivalent to a country. 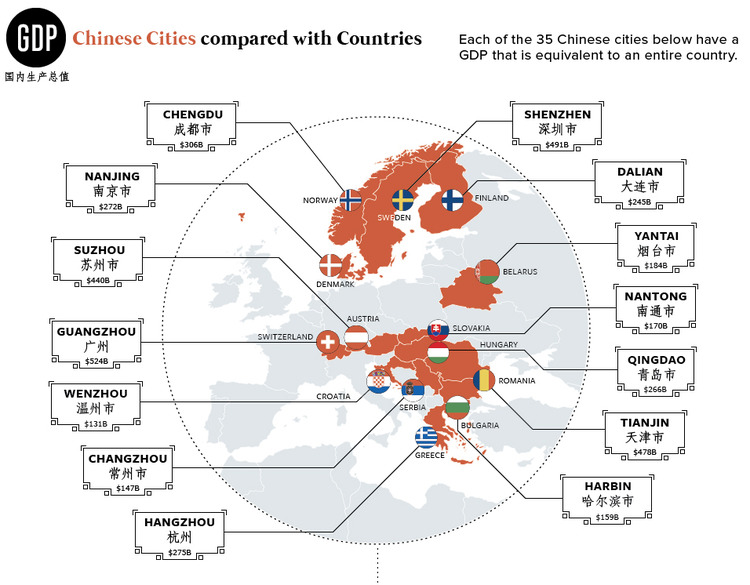 As gleaned from the above data, Chengdu has the size of an economy equivalent to Norway; Chile that of Shenzen; Tianjin that of Romania; Guangzhou that of Switzerland; and Nanjng that of Denmark.

This map is based on the Chinese regional GDP of 2015, in billions of US dollars.

In the same map, three megaregions in China have economies comparable to three of the world’s leading economies. To put this in perspectives: 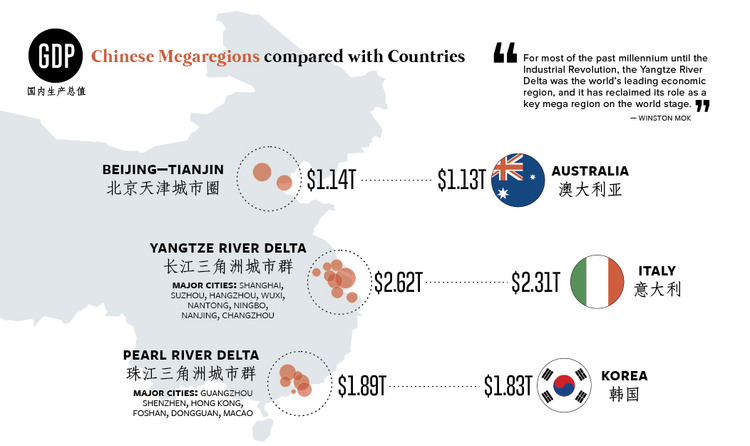 An economic force to be reckoned with

McKinsey Global Institute (MGI) projected that that the top 600 global urban centers (based on GDP) will account for more than half of the world’s GDP.

MGI further predicted that by 2025, 136 new cities are expected to enter the top 600, all of them from the developing world and overwhelmingly—100 new cities—from China.

The foregoing data demonstrates that Chinese cities are economic powerhouses to be reckoned with.

China is touted to replace the US as the next superpower at least according to the opinions of some experts.

Others argue that with the presence of ever growing economies of Japan and India, the ever expanding Tiger economies of East Asia such as South Korea, Singapore, Taiwan and Hongkong and with the emergence of rapidly developing economies of ASEAN countries such as Indonesia, Malaysia, Thailand, Vietnam and the Philippines, it will come out as no surprise that the economic world will shift its attention to Asia in the not-too-distant future.

Will we ever a see this economic power shift from the West to the East in the years to come?

It’s a thought-provoking stuff to tinker with.