“When the going gets tough, the tough gets going.” This expression perfectly applies to a situation when a start-up entrepreneur faces a tough dilemma but managed to be even tougher than the situation itself.

With perseverance and resilience, a truly determined entrepreneur keeps moving towards his goal, abstracts the lessons learned and work even harder and smarter to meet the challenges.

Listening from Bruce Chen gives one a good reflection point on the importance of determination.

Coming from an arts background, it seems highly unlikely that a person like Chen will venture to something techie. But his love of the arts is only complemented and reinforced by his love with computers. He initially established a company named Capsule Innovations back in Missouri.

He flew back to Taiwan and hired his two former students to assist him in his operations. He eventually purchased another domain, iinstallment.com (with two ii’s, i.e., person-to-person). Incapable of paying it in full, he bought it in an agreed payment plan. 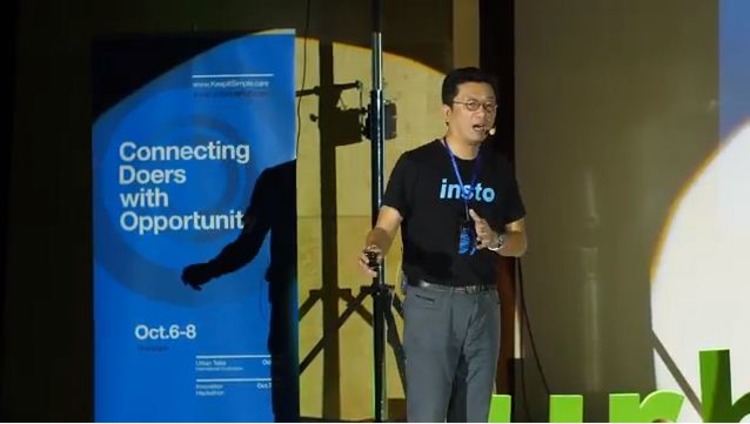 In 2014, he immediately assembled his first team, put up his service and approached some of his friends to test 10 to 12 users of the service. In the summer of 2014, the website’s service became live; he noticed that one of the users of the service kept using it repeatedly which is a good indication that the service has a market.

In 2015, a member of an investors group from the Silicon Valley told him that his business model could translate into a billion dollar business. After receiving US$1.9 million from Silicon Valley investors in 2015, the company recently received US$600,000 from an institutional group, Chen recalled.

He launched INSTO both in the US and Taiwan. It was a testworthy stage. INSTO recorded about US$250,000 during its beta testing period in the US. In August last year, it hit around 1 million dollars amount of transaction.

Not a walk in the park

But running a start-up is certainly not a walk in the park. Like many other start-ups, even if you are surrounded with capable people and do everything you sense is right, if anything can go wrong, it will.

Chen allowed three other persons to be his co-founders, which marks the beginning of trying times for the company.

Things begin to fall apart. His Chief Technology Officer (CTO) resigned to give birth. Another co-founder, a Chief Financial Officer (CFO) who put investment in the company tried to take over it. He realized that after money enters in the equation, people starts to change.

Having encountered lots of turbulence, both surface and hidden, Chen is only quick to share that one needs mental toughness to face failure and pick one’s self back up to try again.

INSTO is a person-to-person payment platform that allows buyers and sellers to schedule payments over time. One can use INSTO for almost practically everything, usually transactions requiring small, digestible monthly installments.

Its automated payment features are best suited for recurring person-to-person payments, such as but not limited to gardening or painting lessons, service fees of lawyers and other professionals.

The app facilitates “peer to peer” payments, allowing consumers to pay one another directly through their bank accounts or with credit or debit cards.

After trying and failing, here are four of the most important lessons that Bruce Chen want imparted to his listeners:

Find out more about Chen and INSTO’s journey in the full video below:

Bruce Chen, is an artist turned founder. He first joined Sony Psygnosis as a 3D Animator after receiving his MSc degree, then was recruited by an Internet startup at Stanford University to join the founding team in Silicon Valley back in 1996. The startup, SinaNet, later became SINA in 1998 and eventually went public on Nasdaq in year 2000. He also worked for E-Bay as its Chief Strategy Office in Taiwan before finally founding his own company, INSTO.