Public transportation is an important issue for commuters all over the world – every day millions of passengers use it to go to work, school or run errands.

At the moment, one of the most stringent problems of urban public transportation is represented by bus/tram stops.

This is brought about by several reasons, among which we could identify a few such as the lack of adequate seats or their absence altogether, being exposed to bad weather or crowded environment during rush hours.

And perhaps most importantly, the way many of these stops look is not contributing positively to the cityscape or to the architectural landscape of some areas.

These are just few of the many inconveniences people face every day while using the bus or tram. In this context the following objectives emerge:

There are certain steps to be taken towards solving these issues, which would open up a new horizon and redefine the concept of the bus stop. Firstly, in order to encourage more eco-friendly urban initiatives like the Green Roofs project, these kinds of roofs could be placed on top of the stops. This would definitely improve air quality and would add color to the cityscape.

Another practical step would be to install a couple of swings inside the structure of each station, an idea that was already implemented in countries that take into account the importance of a positive attitude among the commuters, like Sweden or Canada.

The citizens could enjoy this relaxing feature and using public transportation or, in this case, waiting for it would consequently become more pleasurable.

To prevent the unpleasant situations that occur when bad weather hits during rush hours, the bus stops could be built on a larger surface than they are now. The allocation of more space for each station would result in an increased capacity and would spare commuters from spending their waiting time in rain or snow. 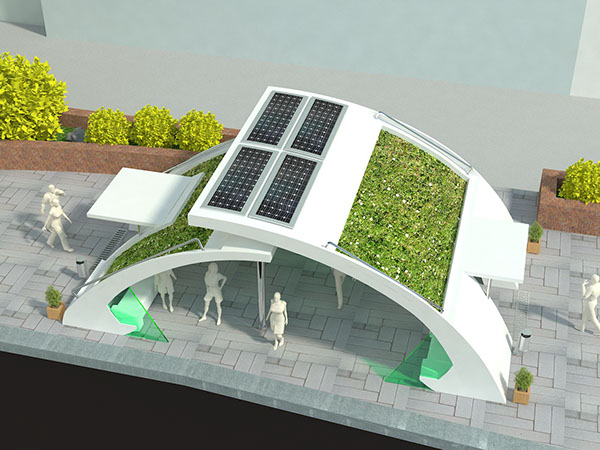 Another measure in redefining these stops would be the implementation of a Book Exchange system. This would function on the simple basis of a book borrowed in exchange for another one placed on the shelves (no other fees involved).

Above are just a few ideas of how to improve these waiting areas for commuters; there are obviously many more ways to do that, and the way to find the best solutions would be for city administrators to consult with the public and choose the preferred options together, so that the design of these stops can reflect the wishes of the citizens who use them every day.